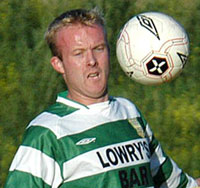 Well done to James ‘Chalky’ Walsh of St. Michael’s AFC of Tipperary town on winning the prestigious FAI Junior International Player of the Year 2011. This is his second time winning this coveted award. He previously won in 2004. He has shown his leadership on and off the field being made captain of the international Amateur /Junior team in 2006.

He led the Rep of Ireland Amateur team to a historic Final of the Uefa Regions Cup in 2011 in Portugal last June for the very first time. The media that attended the Tournament selected James as one of the 10 most exciting players to watch. [www.uefa.com 2011)

James Walsh, a 35 year old self-employed IT Specialist, despite competing against players from the Munster and Leinster Senior Leagues he has shown maturity and leadership by retaining his place as captain of the international teams becoming the most capped male player at junior/amateur level in the Rep of Ireland making a historic 70 appearances for his country over the past seven years.

Menu
This website uses cookies to improve your experience. If you continue to use this site, you agree with it.
Ok