The inaugural TSDL Senior Schools football blitz was held at the Abbey School in Tipperary town last Wednesday with the hosts coming out on top after some brilliant football in some very testing conditions. This is a new tournament and one that the TSDL is delighted to be involved in as it continues to promote the beautiful game around Tipperary.

The league provided all the cups and trophies to the various players and on hand to present them was TSDL Committee member Shane Ferris and Irish Junior International Jimmy Carr. The standard was of the highest quality and the tournament will hopefully become a very important part of the schools football calendar into the future. Thanks were also given to the two League referees Mark Jordan and Timmy Ryan who oversaw the event officiating, and to the Sean Mullins, the PE teacher in the Abbey for the work he and others put into the organising of the event. 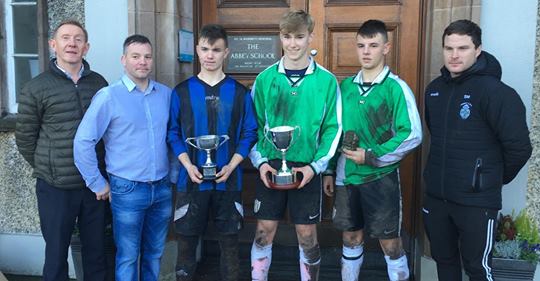 Pictured recieving the winning cup is on behalf of the Abbey CBS, Tipperary Town, flanked by Aaron Ryan (right) who was man of the match in the final game and ColÃ¡iste DÃºn Iasciagh’s Tommy Mc Donagh who was the overall Player of the Tournament.